IBM and Nvidia® Solutions Power Insights with the New AI

when The Register has something new about ... 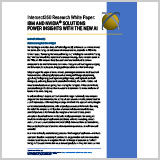 The first thing to remember about artificial intelligence (AI) is that we’ve seen intense interest in it before. Alan Turing, a famed pioneer of computer science, explored it in 1950 in his hallmark paper, “Computing Machinery and Intelligence,” including the notion of the “Turing test,” which set forward the proposition of a computer imitating a human in conversation. In the 1990s, the IBM computer Deep Blue used a combination of AI and brute-force computation to become the first computer to win a chess game and match against a reigning world champion, Garry Kasparov, bringing public speculation as to how far AI can go.

Today AI is again the subject of intense interest, promising to revolutionize broad aspects of human existence, addressing lofty topics such as limiting world hunger (by optimizing agriculture), finding energy (reading seismic geologic maps), avoiding deaths (with selfdriving cars), and curing disease (with personalized medicine). Meanwhile, chatbots and virtual personal assistants are getting closer to acing that Turing test. If these pie-in-the-sky plans sound too good to be true, there is reason to be optimistic. Thanks to a confluence of factors, AI has come a long way.

In this brief, learn from these cases about the benefits of IBM Cloud Pak for Business Automation.

In this brief, learn from these cases about the benefits of IBM Cloud Pak for Integration.